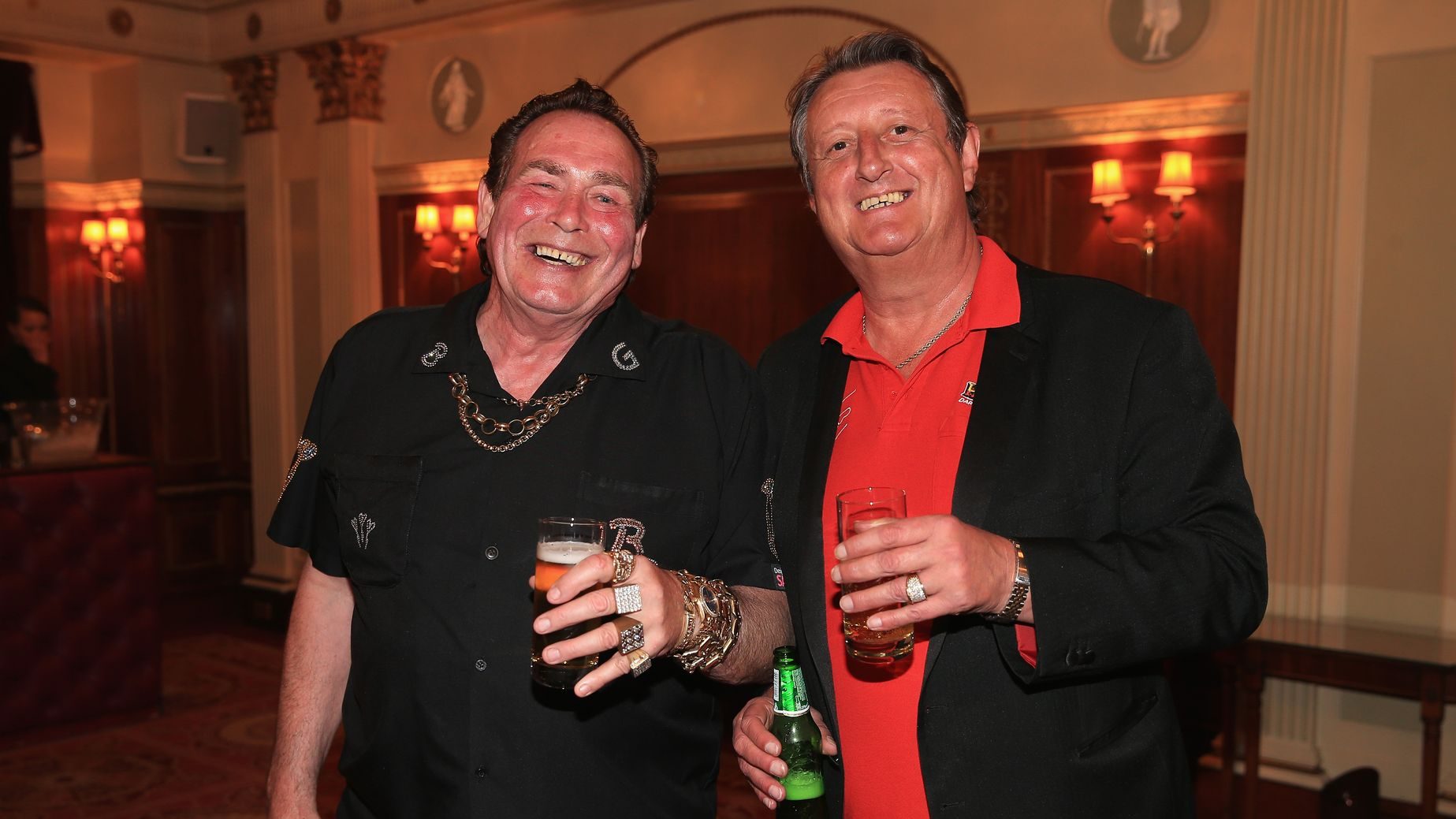 BOBBY GEORGE is widely recognised as the best known, most colourful and charismatic darts player of all time. He is the biggest personality in darts and after co-presenting the famous World Darts Championships for BBC TV since 1999, followed by the Winmau World Masters, he is now known as ‘the face of televised darts’.

Famed for his extravagant stage entrances to the sound of Queen’s ‘We Are The Champions’ dressed in a sequinned cape and carrying a lighted candelabra, Bobby has become a living darts legend.

Twice winner of the famous News Of The World Darts Championship (1979 & 1986), twice Butlins Grand Masters champion (1979 & 1980), former winner of the North American Open (1979) and European Cup Singles (1982), Bobby has competed in 15 Embassy World Championships and twice been a finalist (1980 & 1994). One of the most successful England Internationals of all time, Bobby is a former Nations Cup (1980) and European Cup (1982) Champion.  When asked of his proudest moment or biggest achievement, he will always admit that it was the first time he ever played darts for England.

Still involved with England darts today, Bobby is public relations executive for the England Darts Organisation and regularly supports their events. Widely regarded as the people’s champion, Bobby George was the natural choice for John Smiths as the face of their “People’s Darts” campaign (2008-2010) which was played out across Great Britain.

Away from the oche, Bobby’s straight talking and unique style of darts punditry, along with the rapport and banter with BBC anchormen Ray Stubbs and now Colin Murray, has made him a respected authority in darts.

Since famously being attacked on television by Rod Hull’s Emu, he has appeared in countless top-rating TV entertainment shows, including ‘Bullseye’, ‘Guesstimation’, ‘a Question of Sport’, ‘They Think It’s All Over’, ‘Weakest Link’ and ‘You Bet!’

He has also made Films and DVD’s – most notably the gangster movie ‘One Man and his Dog’ in which he plays the villainous Tony ‘The Butcher’ Barton (2003) and ‘The Story Of Darts’, a double-DVD on which he is the presenter from his own home – the magnificent George Hall.

With his unique and instantly recognisable voice, he has featured in TV and radio commercials alike – delivering the catchphrase ‘You Know The Big Dollop’s Right’ in advertisements for Hellmanns Mayonaisse. In 2010, the “King of Bling” became the face of the Ramsdens gotgoldgetcash TV campaign.

With his combined charisma and darting knowledge, Bobby’s career has been profiled in shows such as ‘BBC Sportsnight’, ‘ITV’s Golden Arrows’ and ‘Gillette World Of Sport’ (seen by an audience of 100 million worldwide) and has aired his views on programmes such as ‘BBC Breakfast News’, ‘Newsnight’, ‘This Week’, ‘Tomorrows World’ and numerous features on ‘BBC Radio Five Live’, it is hardly surprising that he is universally acknowledged as “The King Of Darts”.

Ever popular with all generations, Bobby is a real family TV favourite, from appearing in the shows of Russell Harty, Jim Davidson and Paul O’Grady, to entertaining the kids in ‘Brainiac – Science Abuse’, ‘Swap Shop’, ‘Premier League Allstars’ and ‘Big Breakfast with Zig and Zag’!!

Renowned for his charity work, he has been part of ITV’s ‘Telethon’ and BBC’s bi-annual ‘Sport Relief’, where on behalf of the sport of darts he encouraged players to compete in 4-minute darts marathons all over the country in 2004.  He also starred in ‘Cash in the Celebrity Attic’ on BBC television, raising money for his local Mencap centre, the Woodbridge Gateway Club. More recently, Bobby George joined forces with Tony O’Shea and Snooker rivals Dennis Taylor and Willie Thorne on ‘Lets Dance for Sport Relief’, performing a never to be forgotten routine to Run DMC & Aerosmith’s Walk This Way!

Bobby has become a TV personality in his own right, taking centre stage in programmes such as ‘Celebrity Fit Club’ where he lost over 3 stone on the ITV reality show… ‘Don’t Call Me Stupid’ where he succeeded in learning the life and works of Geoffrey Chaucer… and ‘Through The Keyhole’ where Bobby’s home was showcased by Lloyd Grossman and Sir David Frost.  Most recently of all, ‘Celebrity Come Dine With Me’ had Channel 4 viewers admiring Bobby’s culinary skills, not to mention his after-dinner rapport.

Home is the truly baronial George Hall – which really is as grand as it sounds! The beautiful house is set in several acres of Essex countryside and has 17 bedrooms and a lounge bar complete with dartboard, full-size snooker table, and enough sporting memorabilia to satisfy the most ardent fan.

Outside, the property has a set of darts on the iron gates and a stained glass window above the front door that is half a dartboard! From the air it has the shape of a darts flight, and flying proudly atop the building is the flag of St. George.

No half-measures for Bobby George!

He even has his own kitchen away from the main house in which his speciality is Chinese cuisine. However, what makes George Hall extraordinary is the fact that Bobby George built it with his own hands!  It took him five years to complete, and it even has three fishing lakes, which are open to the public and available for an ever-growing diary of corporate days. Company executives and clients enjoy a day of fishing before meeting ‘The King Of Bling’ for refreshments in the bar.

Business interests at George Hall do not end there. In association with expert dartboard engineer Harry Kicks, Bobby has his own factory workshop where he now manufactures “R&H” Bobby George Dartboards, hand-made to the highest quality by the man himself!

He has been a star columnist for Darts World Magazine since 1994, where he writes his own humorous, frank and often outspoken column in every issue. He is also partial to a tweet or two, and you can follow his views on Twitter! @BobbyGeorge180.

Despite his many projects both at home and with the media, Bobby still remains the most sought after darts player on the circuit. His entire year is spent touring the UK and Europe with his own ‘fun’ darts exhibitions, with professional MC and referee “Little” Richard Ashdown by his side.
Whether it’s a challenge match, fundraiser, presentation night or corporate evening, Bobby is always on form both on and off the dartboard, with the perfect mix of skill and humour.

To the delight of darts fans young and old, Bobby was reunited with ‘old friends’ in 2008 when eight of the biggest names from darts heyday came together again to compete on TV in the Betfred.com League of Legends. Travelling across the country, the event was an instant success, so much so that a nationwide theatre tour was launched in 2009. Thirty years after winning the Nations Triples together, and with 20 world championship finals between them… Eric Bristow, John Lowe and Bobby George entertained the masses in a show complete with walk-ons, comedy and darts entertainment, hosted by TV funny man Duncan ‘chase me’ Norvelle.

Bobby’s long awaited autobiography was published in 2006. Titled “Bobby Dazzler”, it’s certainly a story of two halves, as Robert Francis George didn’t even throw a dart until the age of 30! Told in his own words, it’s a genuine ‘rags to riches’ life tale of how Robert George became Bobby George!
His second publication, “Scoring For Show, Doubles For Dough” was released in 2011. It gives a light-hearted look at Bobby’s unique turn of phrase, in an informative guide to ’Darts Lingo’.

Today, Bobby has every reason to smile, happily residing at George Hall with his beautiful wife Marie, and their two sons Robert (24) and Richard (22). Animal lovers all, they share their lives with a cat, a tortoise, 4 jack russell dogs, 2 african grey parrots, 6 terrapins and 1000’s of freshwater fish!!

BOBBY’S HISTORY (amongst others)

News of The World Champion 1979

News of The World Champion 1986